“Film can rescue anthropology and deliver it from its confines.”

The introduction from film-maker Hugh Brody to this year’s screening of ethnographic projects made by the undergraduate and Master’s visual anthropology students suggests a liberation of authorial voice to articulate its subject through a cinematographic medium: indeed, many of the shorts that were screened were free from an imposed agenda, telling moments revealed through shrewd observation and unforced technique. Charlotte Austwick’s Welcome To The Country looked at the rural community that she grew up in, and the reaction of locals to the increasing influx of urbanites relocating there and the prejudices they hold against parochialism. There was a pleasingly sardonic wit expressed by the film-maker (an interviewee bemoans city slickers invading the countryside that cuts to an axe chopping a log), and her father proved an eccentrically entertaining character, sighing when he recognises the look of piqued curiosity exhibited by outsiders toward them (“Oh, they’re going to want to talk about the locals again…”) and recounting tales of their prurient fascination at seeing such ‘marvels’ as peas growing in the wild. But, despite justified grumblings from the villagers, there was admitted compromise in the fact that those accustomed to city ways are more prepared to pressurise local councils regarding maintenance of facilities. Austwick’s film could have perhaps benefited from the point of view of an interloper, to see what visual and behavioural contrasts exist between the two types of inhabitant, but, overall, it was a work of warm confidence.

Rachel Downes poses a question to the four filmmakers.

Communities featured prominently in the next array of films, from the University’s diverse religious fraternities to a busy indoor market in Leicester, via a Cosplay conference in London. Kate Al-Khalili’s The Community Within Religion observed ritual, be it a baptism or Muslim prayer session, with intimacy, her camera genuflecting with prayer-goers and close-framing the various groups, highlighting the bond between them. Yet there was also the occasional flash of the pragmatic limitations of open-armed welcome: the RC chaplain at the University of Kent opines that he couldn’t physically cope if too many students came to the institution for Catholic foundation. Anastasia To’s Muchly Needed captured the multicultural diversity that still thrives in a fish market with a vibrancy of colour and contrast, reflected in the choice of interview subjects and close-ups of the wide variety of fish for sale. The choice of location was inspired, as many customers related to the piscine wares as a connection to home, a demand for domestic staple fuelling supply of increasingly exotic fish, which led many to recount family anecdotes of fish preparation and styles of cooking to the camera. Cosplay, filmed by Harrison Holt, asked a number of people why they participate in costuming: a means to overcome shyness; an antidote to bullying; providing outreach for disadvantaged community groups. What was striking was the static poise that cosplayers exhibited when Holt filmed them, as if waxworks in a gaudy gallery. And there was something sneakily subversive about including footage of them drinking Coca Cola or eating a Subway: for all the flamboyant esotericism on display, the cosplayers still chow down on junk food, a symbol of homogeneity if ever there was one.

The next collection of films were individual portraits that often revealed more about the film-maker than their subject. Hannah Evans’ About Dad fulfilled a desire that most of us have: to put our parents in the spotlight at the mercy of our interrogation. But her father Jeremy proves an elusive figure, disarming Hannah with a banality of recollection when she asks him what his favourite memories are of her or matter-of-factly recounting details of his brother’s death, a story that an audibly upset, off-camera Hannah hears for the first time. If the presence of a camera can open up its subject, the revelations that this affords are not always easy to swallow. With Time To Use also focused on a father, one who has taken an early retirement yet is becoming increasingly restless. Alex Astin’s frustrated insistence that his father sit back, relax and enjoy his well-deserved fallow period instead of obsessively busying himself subtly articulated an irreconcilable generational divide, made poignant by inserts of the tide ebbing and flowing on the beach that Astin Senior’s house overlooks, potent metaphors for what time there is to use. Lucinda Newman’s Portrait Of A President followed the student president of Canterbury Homeless Outreach as she discussed the voluntary work that the group do. Impact softened by prolonged imagery of the subject smoking and playing guitar in the sunshine, presumably to suggest what a free spirit she is, and no footage of or interviews with the people she helps, the film nevertheless provided a saddening exposé of NIMBY (not-in-my-back-yard) council attitude, that homeless people should be moved on to another place for someone else to deal with. This revelation was all the more powerful for its organic emergence in Newman’s conversational approach.

The peripatetic subject of Anna Bettini’s Reflessioni On The Go ambled around Canterbury’s Westgate Gardens and High Street, as his thoughts on the differences between his native Sardinia and Britain were narrated through voiceover. Whilst delineating the British stereotype that he has experienced, his comments reinforced popular notions of the Italian temperament, whether announcing that “British people give credit to our level of learning and knowledge” with blithe hauteur or detailing how quick his fellow countrymen are to make a scene in the workplace as opposed to the polite placidity of their UK counterparts. If the imagery often seemed superfluous to the pre-recorded interview (frustratingly we do not hear his comments when in front of an Italian war memorial in the city), Bettini revealed her strategy in the closing moments: since staying in Canterbury, and despite the cultural differences good or bad, he feels a closeness to his current location, as a ‘second home’ to the one of his birth, the constant roving reflective of this transition.

With so many quiet epiphanies, the final three shorts displayed a direct confidence with both style and examination. Rachel Downes’ Cirque de Curiosité had little to say about its titular cabaret company, their filmed acts intercut with rather conventional interviews. However, the acts themselves were a marvel of montage and colour, the febrile intensity of performance captured through swathes of neon, pulsating editing and multi-angled curiosity. And, for the interviews themselves, Downes made dramatic choice of camera position, filming jugglers from a high gantry or, bravely, right underneath them, the camera lens in danger of destruction should a ball stray from its controlled rhythm. Telling Secrets began with its maker and subject, Simon Holt, attempting to light candles on a birthday cake that become continually extinguished: in a droll cut, it is revealed that this is because the table is positioned next to an electric fan. Holt chose to make a film about his prior struggles with depression and is candid on camera about his feelings. But it is the facility with visual metaphor that distinguished this piece, that opening image profoundly resonant through its deadpan simplicity. A therapeutic experience, for both Holt and the audience. 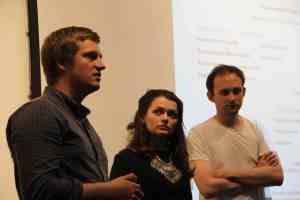 Wrapping things up was Joe Spence’s Our Patch, a documentary about a farm in Herefordshire that doubles as an animal rescue shelter and a centre for people with special needs. Spence’s warmth and empathy with his subjects was touching, his camera drifting out of focus briefly as the owner of the farm becomes moved to tears, a moment of discretion to his subject but one that also elicits a similar response in the audience, the image welling up through a subtle lens shift. It is moments like this that film does not only rescue anthropology, but delivers us all from the confines surrounding us, be they social, emotional or familial. 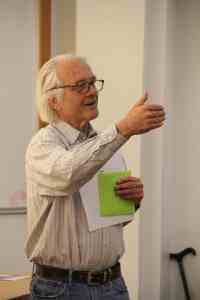 David Pick and Professor Hugh Brody gave detailed feedback before awarding the prizes in their name.  Click here and scroll down to learn more about their work. 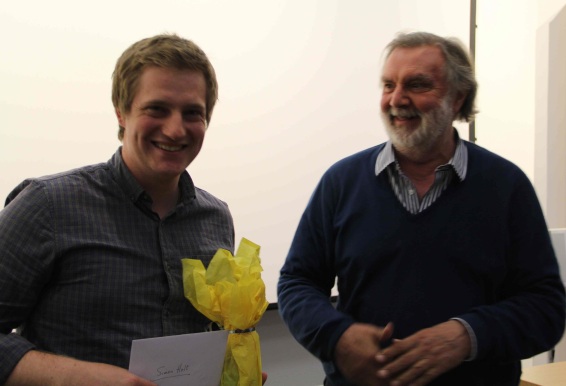 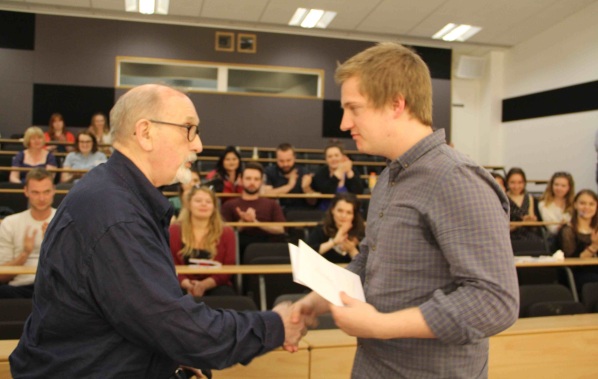 Rachel Downes and the CSAC Prize.