28 Days on the Moon on Turkish TV 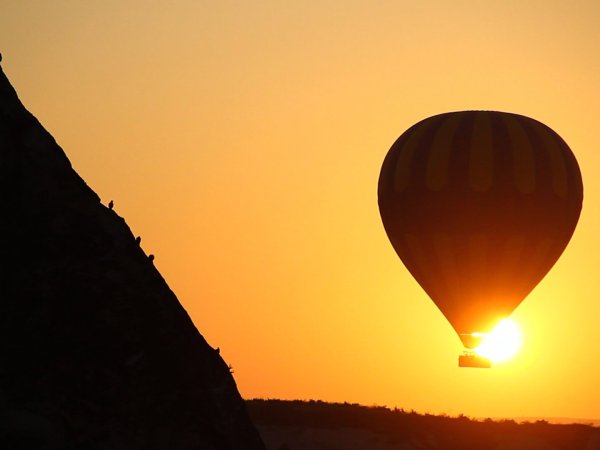 MPhil student Eda Elif Tibet’s documentary will be first broadcast on the Turkish documentary channel, İZ Tv,  on the 8th June at 10.15pm. She writes about the origin of her documentary, the process of its making,  and how her film was discovered on Facebook.

It was right after one of my first lessons in Visual Anthropology at Kent that I decided to realize my dream documentary project on Cappadocia. After many visits to the field site since 2007 and a long research period that took almost two years, I was just getting ready to try my first documentary. I did not have a budget, and there were no other crew members other than myself. I was excitedly getting ready to film, when my father passed away. 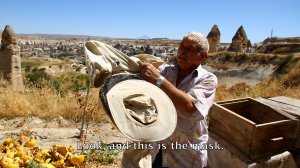 A beekeeper in Cappadocia.

I abandoned everything for a while with deep sorrow and grief. But, not so long after, I realized that perhaps to continue working on this film could make me understand some of the mysteries of life and what it is to be human, in a more humorous way. My mother bought me a HDSLR, the Canon 7 D, and I bought myself a mono microphone that could be placed on the top of the camera. In the field Dr. Andus Emge and his wife Gülcan Yücedoğan Emge, who also feature in the film,  were a great support. They hosted me several times in their wonderful guesthouse . I had friends all over Cappadocia, I was never alone and as I talked about my documentary idea , people seemed to be really engaged and supportive throughout the filming. The people who agreed to be filmed were more than informants to me. They were amazing characters that guided me with their light and friendship throughout the most difficult time of my life.

I shot the film in 28 days, because that was the time I had been given to complete the rest of the fieldwork and discipline myself as a first time visual anthropologist. I called Cappadocia the moon for its breathtaking moonlike landscape and also as a reference to its’ people who I thought were not quite understood; the secluded, conservative yet very friendly and hospitable cave dwellers.

I did not just want to make a film that was academically interesting but was also understandable for the people I encountered in Cappadocia. After filming enough for a rough cut I was lucky to meet with Tufan Bora, a very talented editor who has helped me a great deal. Without his assistance and great ideas on building the narrative flow for the film, I wouldn’t have achieved what I have now.

For the soundtrack of the film, I was also fortunate to be given the screening rights of  wonderful songs by the inspiring musicians Alain Blessing, Ozan Musluoglu and Tunç Tandoğan. I also got the opportunity to screen the film to visual anthropologists from around the world at the Intimate lens visual ethnography film festival in Italy, to students at Massey University in New Zealand, and in a mainstream student film festival in Abu Dhabi. In January of this year I drew on the feedback I was give to edit a final version and create a short trailer. With great luck, the trailer was recognized by an editor from IZ TVon facebook. After they watched the whole film, they asked to broadcast it for a year. Iz Tv is Turkey’s first and only documentary TV channel and was founded by leading photojournalists, independent documentary film makers and media professionals of the country. In  2007 they were awarded a Hotbird TV award. Iz TV remains a highly rated national documentary channel, featuring a wide range of documentary films on issues that are vitally important for the country. 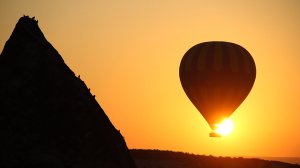 One of the closing scenes of the film.

The commissioners at IZTV told me that they really appreciated the film and were curious to know more about visual anthropology (my film is the  first work of its kind to be screened on Turkish TV) pointing out that they need more films on cultural heritage and tourism that communicate local perceptions.  The editor who watched the whole documentary, commented: “ as a TV channel covering socio-political issues, tourism management and the protection of cultural heritage sites in Turkey  are among the weakest links in the country” They also found the film cinematographically compatible and engaging as it discusses a serious topic in a humorous way . They also pointed out that for the last two years they have shot all their documentaries on HD SLRs. Having it in HD, they said, was a good asset for TV broadcast.  The first of many broadcasts is on the 8th of June at 22:15pm.